Ad blocking has gone from a mild irritation to a full blown crisis showing no signs of letting down. The dramatic rise of ad blockers continues to climb with no end in sight. The ad blocking trend is becoming fearsome, creating a great need for ad blocking solutions.

3 in 10 internet users in the United States are expected to use anti adblock solutions by 2018, says eMarketer. Publishers are in need to tackle the issue and to regain the control of their online ads of what ads are delivered and at what price in order to make up their revenue losses.

Publishers’ are in need to combat ad blockers: $21.8 bn ad revenues has lost

Ad blockers could cost an estimated $21.8 billion in lost revenue a year to online advertising business, Download Aon Browser according to pagefair report of ad blocking. “Ad blocking is as big a disrupter for us as the internet was when it came along”, said Darren Goldsby, chief technology officer, Hearst Magazines UK.

Ad blocking is estimated to cost publishers more than $75 billion by 2020 and even if everything goes well for publishers, ad blocking is still expected to cost more than $16 billion, says digiday. The publishers are needed to figure out what can be done to beat these harmful ad blockers and regain control over their revenues and audience attention at the same time. Publishers have to balance the often competing requirements of what agencies and brands value.

According to digiday, Across Dennis Publishing’s portfolio, the ad-blocking rate has remained consistent at around 23 %. On mobile, though, ad-block rates have increased from 2 % to 4 % over the last 12 months, which is worrying as the majority of traffic comes from mobile, so the fear is this rate could increase. Dennis has reduced ad-block rates from 30 % to 19 % by blocking content to ad-block users, then asking them to white-list the site.

Forbes promises ad blocking users that they’ll get an ad-light experience if they turn off ad blockers, reports BBC. Forbes has said that if readers comply, no welcome ads, no video ads inserted between paragraphs, and no ads between posts will be shown to them. If they don’t comply, they will be denied access to the site’s content.

Mobile adblocking will expand in 2018

According to Pagefair’s 2017 Adblock report, the largest geographical driver of mobile ad blocker use has been in the Asia-Pacific, where 94% of mobile ad blocking takes place. Mobile adblock usage has expanded rapidly onto 59% of smartphones in India. Mobile ad blocking is now ready to expand into North America and Europe. There were found over 600 million devices running adblock software globally, 62% of which were on mobile devices in December, 2016.

This year, 13.8% of smartphone users and 31% of desktop/laptop users are expected to use ad blocking solutions, reports eMarketer.

According to eMarketer, aon adblock browser 89 % of the 11.4 million people will block ads on desktop/laptop whereas 33.8 % will block ads on smartphones. Looking ahead to 2018, overall growth will slow to 8.1 %, reaching 22.2 % of 12.3 million UK internet users. The gap between desktop/laptop and smartphone ad blocking will begin to close in 2018, but adoption of software will still be a long way behind on mobile.

In 2018, more publishers are expected to use ad blocking solutions

As the pressure rises on publishers, the demand for anti adblock solutions could increase exponentially. Many ad blocking solutions to stop adblock from hurting publishers’ online advertising business have been around for several years. Publishers are now in need to get the control over their ads and compensation that they deserve.

Smart publishers will choose solutions carefully so that they can deal with ad blocking in a way that ensure the solution works in best interest of advertisers and the end target audience.

For your convenience, we’ve come up with a list of companies countering ad blocking that provide the top ad blocking solutions that will make a difference in 2018.

How it counters ad blocking: Google might be surprisingly one of the ad blocking solutions, but as a large and influential ad network, Google has a big stake in the market. Google allows users to choose which ads they want to see while using Google’s tools. Google will allow publishers to participate in ‘Funding Choices’ program. When a user who is using third-party ad blocker visits a participating site using Chrome, user will be asked to either turn off ad blocker or to pay for the content. If they select to pay the fee, Google will take a 10% cut and if they select neither, they won’t be able to view the site. Publishers will not have to manage these kinds of prompts themselves. They can outsource this task to Google.

How it counters ad blocking: It is an authorized analytic tool that helps publishers to measure adblock. It understands the way to make a difference by listening everyone’s needs and find win-win solutions thereby helping publishers to improve the ad blocking issues. As a result, advertisers don’t have as much competition on each page and users have less clutter. In addition to this, PageFair enables them to use first party data and create a premium sector for readers who are willing to pay for content.

How it counters ad blocking: Adzsafe is the latest attempt to counter the impacts of adblocking. It stops ad blockers from interfering with online ads and supports ads to load and to be safely displayed without any interference by ad blockers. It does so without asking publishers to replace their online ad providers and it doesn’t need any minimum traffic requirement, like other ad blocking solutions require. It bypasses adblock from making users unreachable to online content and prevents ad revenue losses. It has ‘Free Internet Protection’ tools that helps free internet providing sites to protect their content on user’s Download Aon Browser (Play.Google.Com) that has adblocker installed. It helps publishers to gain compensation u deserve and control over what ads are to be delivered and at what price. In addition to this, it doesn’t need publishers to share their ad revenues with them.

It provides viewable ads, enhances user’s experience and gives effective monetizing platform. It uses contextual and Try Aon Mini Browser Adblock for Android behavioral analysis for ensuring that all the ads we serve are relevancy of the ads they are serving to users and therefore helpful instead of a nuisance. It offers a great opportunity to counter ad blocking. It offers mobile-friendly in-image ads for ensuring a great user experience for opera browser alternative readers. The main purpose of this ad blocking solution was to enhance user’s experience by providing quality visual ads because pages with visuals convert better on websites. This sophisticated programmatic platform leverages visual assets to captivate users for generating high RPMs. It optimizes the value of each impression using RTB and real time big data analysis to maximize CPM. Its visual content ad formats delivers high CTRs by using dynamic optimization measurements. It continuously optimizes inventory’s viewability and ad placements to maximize touch points with publishers’ targeted audience.

Make 2018 the year you beat the ad blocking trend 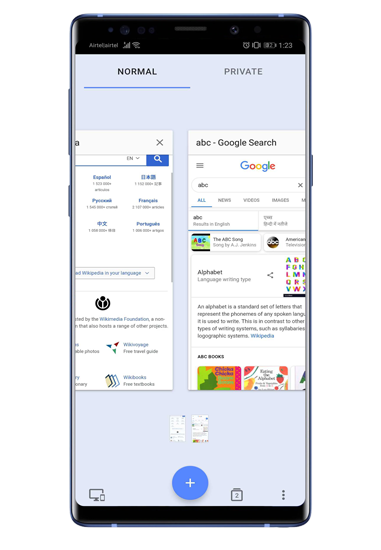 Now is the time to smartly choose a strategy and gaining compensation from your ads that you deserve. If you start now, you’ll be much better off When 2019 comes along.

“Hello, I’m Charles Smith I love writing articles and blogs. I always share my knowledge in an effective and meaningful way. For me, writing is an extension of my thoughts. Here I am writing about publishers major concern, ad blocking. Have a look at website for getting the best ad blocking solution”